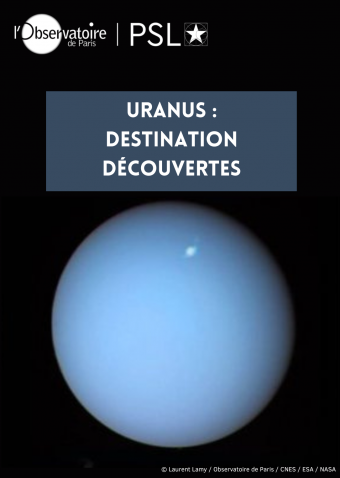 Uranus is the destination of the next major exploration mission led by NASA. Rediscover the history of this scientific exploration and imagine what we'll learn by the 2050s.

On January 24, 1986 the Voyager 2 probe flew over the seventh planet of the Solar System, Uranus. And since then, no probe was launched! Fortunately, telescopes on the ground or in space kept scrutinizing this planet, discovered by William Herschel in 1781. But the far distance that separates us from this icy giant planet won't help planetary scientists: the community needs measurements taken "on the spot" to make progress on almost all major issues. From the interior of the planet to its magnetosphere, through the atmosphere, rings and satellites, almost everything remains to be understood in this planetary system so different from others. Finally, for the first time in history, in April 2022, Uranus is ranked as the number one priority for the next major exploration mission led by NASA. This conference will bring you to the 2050s, and this is no science fiction!

The event will be held online on Zoom, the presentation will last 30 minutes and will be followed by 15 minutes of questions and answers.

In case you can't attend, the webinar will be available in replay on the YouTube channel of Observatoire de Paris - PSL.

Replay available on the YouTube channel of the Observatoire de Paris - PSL.