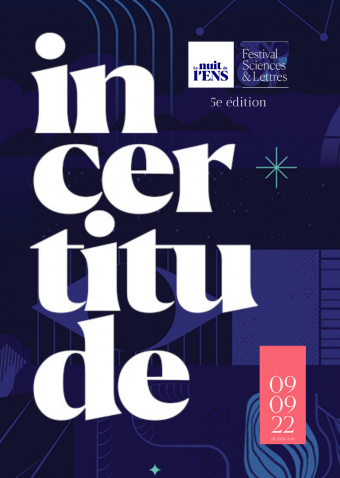 One word defines our time, our challenges, our expectations: Uncertainty. With its large open-air stage and dozens of conferences and debates to discover, grasp and get to know the notion of uncertainty, this fifth Night has all the makings of a festival. True to the spirit of the Nights, the 2022 program includes leading figures from all fields of research, the arts and the world of ideas.

If one had to describe the last two years in one word, uncertainty would probably come to mind, and it is also the theme that ENS-PSL has chosen for this Night after missing for two years. Producing knowledge, making Sciences, is a slow, patient, discreet process. And it is also most often a daytime process.

But during the Night of the ENS, everything is reversed. Knowledge is displayed, it becomes festive, turbulent and nocturnal.  The ENS-PSL offers a real musical journey that will combine concerts, improvised performances and recitals

On September 9, 2022, from 6 pm to midnight, 41 conferences, 7 workshops, 7 concerts and 1 play will be held. The École normale PSL does not only invites us to a mere Open Night, but to a real Festival. The 2022 program does not avoid any of the challenges of our time.

To shed light on them, the École's scientific community and all its partners join forces and offer various formats: conferences, debates, discussions, etc. Several sounds that can be heard during the Night:

In the arts, theater lovers will be delighted. The uncertainty of love will be the main theme of their evening, with an exceptional performance of Le Misanthrope, directed by Léonore Darrobers, starting at 9:00 pm. It will be preceded by a debate with directors who have all confronted Molière's work, and followed by a stage-side performance with the artists who will be performing that evening at the Théâtre Nicole Loraux.

Entry is free of charge