2021 Times Higher Education rankings: PSL among the top 50 for the third consecutive year

PSL ranks #46 in the Times Higher Education global ranking, remaining among the top 50 universities worldwide and #1 in France. 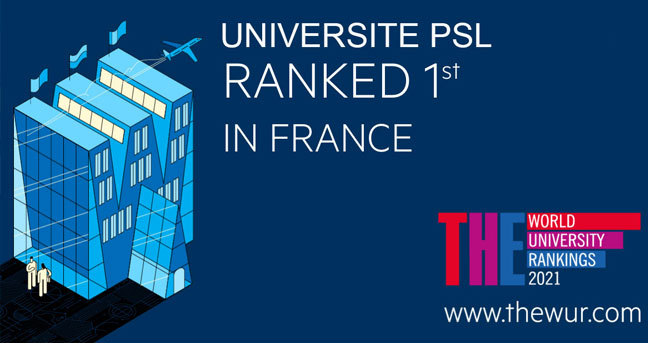 On September 02, 2020, Times Higher Education (THE) released the global ranking of universities, which includes over 1,500 institutions in 93 countries. The ranks are based on an enquiry and on data in five domains: teaching, research, quotations, contract with industries, international.

PSL, which has been ranked since 2017, is among the 50 best universities worldwide for the third consecutive year.
Being #46 worldwide, PSL is also the #1 university in France and among the 7 best in Europe. Such results are consistent with those obtained with Leiden, QS, Shanghai (ARWU) and (CWUR) (see below). PSL ranked can be compared to Ecole polytechnique fédérale de Lausanne, McGill University (Canada), NTU (Singapore). According to the data, PSL provides quality teaching (#31) and research (#45).

"THE, QS, Leiden, ARWU, CWUR: all these rankings indicate that our university is now well established among its international peers. Regardless of the differences between these rankings, regardless of the diversity of indicators taken into account, PSL is in the top 50: we are now quite visible. Although it is not our primary purpose, the rankings inspire a shared pride among all our communities, in the process of building a young university; for our graduates, it is a golden ticket for their career."

PSL in the international rankings

Rankings by themes (not scientific subject)