PSL is ranked #26 in the QS world University ranking 2023. Up 18 places, it enters the highly competitive circle of the world's top 30 universities and retains its position as the leading French university in the ranking.

Having entered the top 50 in 2018, PSL achieved a strong progression this year. Now #26, it compares to international institutions such as Columbia, Berkeley and the University of Tokyo. This result reflects PSL's numerous international scientific cooperations (scoring 99.7 out of 100), the excellence of its reputation both academically (74.4/100) and with employers (97/100), and the impact of its scientific work (84.1/100).

Alain Fuchs, President of Université PSL University, declared:
"This achievement is the reward for the considerable efforts made over the past ten years. The QS ranking is among the most watched rankings in the world, along with those issued by Shanghai and the Times Higher Education. Being in the top 30 is a golden ticket for our students. This was recently demonstrated as PSL graduates are eligible for the high-potential individuals visa set up by the British government." 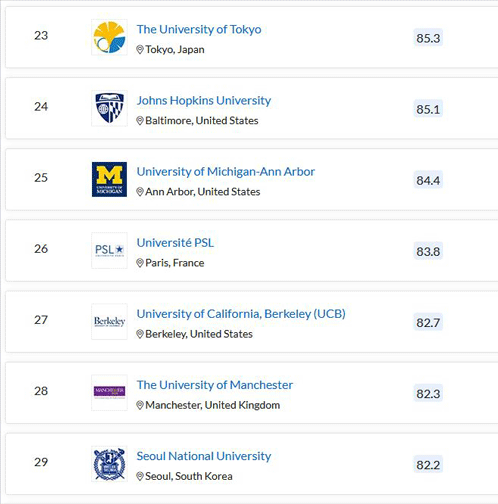 PSL in the international rankings

All PSL news
Learn more
PSL in the international rankings