Antoine Andrieux is an Engineering student at ESPCI Paris – PSL, and is fascinated by science and the many ways it is involved in our daily lives. Since he was at high school he has been concerned about climate change, and is keen to find ways to be actively involved in raising awareness and putting simple and effective solutions in place. Last June, he took over as president of PC Durable, a student organization at ESPCI Paris – PSL, which works all year round in conjunction with other university organizations to run training sessions and various operations to engage students on campus. 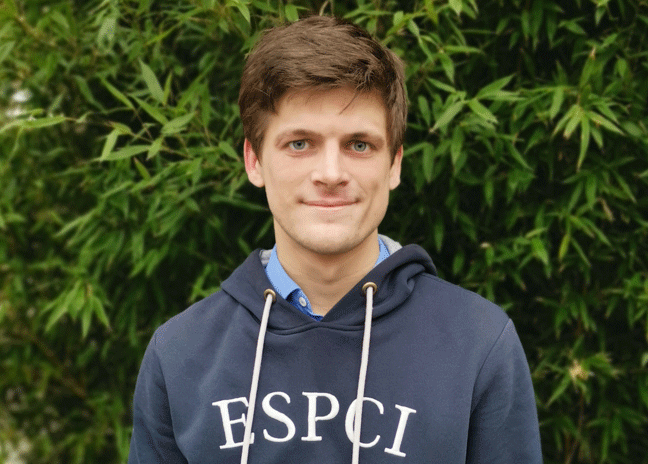 The son of engineers, graduates from the Arts et Métiers Institute of Technology, Antoine readily admits that he grew up in an elite educational environment. However, when it came to choosing a major in high school, he hesitated. He was passionate about science, and was curious and impatient to learn more about the fundamentals. But he was also fascinated by philosophy, economics, Classics, history, etc. Above all, he was looking for a transdisciplinary program that would enable him to combine everything. It was one of his math teachers in preparatory classes for the Grandes Ecoles entrance examinations who suggested he apply to ESPCI Paris – PSL. The school, boasting six Nobel Prize winners, has trained generations of engineers with its cross-disciplinary curriculum where experimental practice plays an important role. He joined the school after his preparatory class in Lille, and has no regrets about his decision:

“At ESPCI, 70% of engineering students go on to do a PhD. I’m sure I will too. I want to dig deeper and get an understanding of our world. I don’t know yet if I will be a researcher in the academic world or if I’ll go on to a career in industry, but one thing is for sure, I want my research to be useful to society.”

For Antoine, this goal is firmly linked to his commitment to the fight against climate change. “Innovation engineers will create new products, meet new needs. Their impact is key, reaching far beyond their personal actions. To me, including climate issues in these innovations is essential!” Antoine is well aware that this is an ambitious challenge, but it combines perfectly with his commitments in the PC Durable student organization.

“Nowadays, lots of ESPCI - PSL students declare their commitment to climate issues and their awareness of the challenges. But paradoxically, we also feel a kind of despair or helplessness. I believe that being committed means nothing if you don’t act. Faced with the scale of the problem, it is sometimes difficult to identify the driving forces. With PC Durable we intend to pool our collective resources. Together with the other PSL associations, we intend to organize conferences and events, creating key encounters… so that we can reflect and act together.”

Combining reflection and action, this is indeed the heart of the problem. For as long as he can remember, Antoine has been concerned about environmental issues. However, he really became aware of how quickly change was happening when he saw the bay at Dunkirk:
“On days when there was no wind and no rain, the horizon was overcast and you couldn’t see further than 100 meters. I realized that as I looked at the landscape, I was witnessing pollution in context. But at the same time, it was industry that kept the town alive. It was shocking to see the pollution with my own eyes and not just through figures, and at the same time I knew that this was an intractable problem.”

When he was a preparatory class student in Lille, Antoine took part in numerous climate marches, but was frustrated that he couldn’t do more. In his first year at ESPCI Paris – PSL, in the middle of the Covid epidemic, he joined an association linked with the Shift Project, helping to organize debates around the French plan to transform the economy and create a carbon-neutral society free from fossil fuels. A decisive experience.

“One of my jobs was to write memos. I attended the debates and listened attentively. Among the participants there were of course many engineers and university professors, but I also had the opportunity to meet people from other professions: farmers, butchers, etc. It was extremely enriching to hear these different points of view and this convinced me that this was the right way to go. I really hope to be able to inspire PC Durable in the same way.”

Since September, PC Durable has helped to organize PSL Anthropocene, a series of conferences and events organized by PSL component schools for all students to learn about this key topic. This commitment has continued throughout the year so far, mainly involving conferences, events and recently the actiovities of the PSL associations for the Student Week for Ecology and Solidarity in 2022. Based on an initiative launched by the Student Network for an Ecological and United Society, nearly twenty events (conferences, workshops, Clean Walk, etc.) were on offer on campus from March 29 to April 6. Antoine admits that this is all part of a long-term project, but for now there is no lack of motivation and intelligence to drive the movement forward.

Screening of the documentary "Maîtres et Possesseurs de la Nature" (Masters and Owners of Nature), directed by Yann Plantier. Philosophers, physicians, climatologists, and many more, share their views and their approaches to humanity in the Anthropocene era. Followed by a debate with scientists and experts. Tuesday, April 5 from 6pm to 8pm in the Jourdan amphitheater, 48 boulevard Jourdan, Paris 14e.